Between Rocks and Rainclouds - Coldclimb 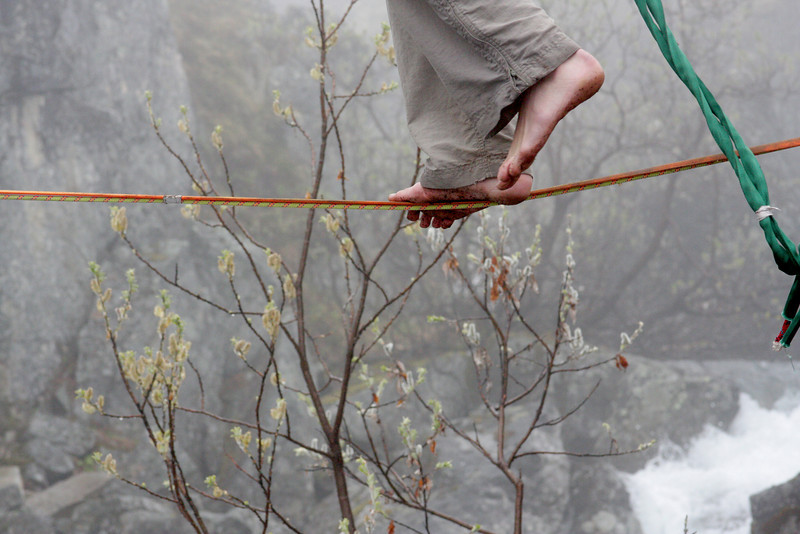 Ty Morrison-Heath's feet leave the sturdy ground behind and venture out over the turmoil of Reed Creek on the Reed Creek Highline.

Spring came like it always does in 2008, with melting snow gradually revealing the rocks underneath, and the road to Archangel Valley opening up for travel in mid June. The warm weather and glimpses of sun at that point in the year didn't give us any telltale signs of how wet and cold the rest of the season would be, so we climbers were chomping at the bit to get out and scale some dry cliffs. Early season found us climbing near Chickaloon on the Wookie Wall, and later as the snowline receded into the mountains we started heading into Hatchers for the secluded scenery and more remote nature of the routes there.

Plans were made in June for Kelsey Gray, my wife Tracy, and myself to head into Reed Valley in Hatcher Pass and get some climbing done. Kelsey was writing a climbing guidebook for the area and needed to climb as many routes on as many walls as possible during the summer. We drove up Archangel road to the Reed Valley trailhead packed for a couple days of climbing and hiked the three-quarter mile trail to our campsite, and then we hit the rocks.

It takes more than a miserabe drizzle to get Kelsey's spirits down during a day of climbing.

Our goal for the day was to climb the Snowbird Slab and get as much information as we could on every route on the rock. Snowbird Slab sits at the base of a ridge that divides the end of a small low valley and looks down on the scattered and overgrown remains of what was formerly the Snowbird Mine Village, a group of cabins inhabited by miners in the 1930s and 40s. The left side of the rock face is relatively low angle and largely featureless except for a long wavy flake extending nearly the full length of the rock, and the right side drops vertical and makes a few sharp turns around what climbers call the "Cornerstone." The whole section of wall is in the sun most of the summer, and provides for some excellent climbing most any time of the year.

We started our day covering a few of the easy short climbs on the left end of the slab, climbing quickly and unroped up shallowly sloped faces with good holds, and then moved on to one of my favorite routes in the area. Snowflake is a 5.8 that follows the wavy flake up the whole slab with a gap behind a thin surface layer of rock that's just big enough for fingers, but with relatively few footholds to go with the handholds in many places. A climber slips fingers behind the flake and places feet flat against the wall, pulling with their hands and pushing with their feet in a technique called "liebacking," which gives enough friction to securely stay in control and move up the rock.

Kelsey led the way up Snowflake, but as he reached the top and put me on belay, our partly cloudy sky with patches of open blue started spitting rain on us. We wanted to get a lot more climbing done this day, but soaking wet rock is enormously difficult to climb due to lack of friction, and on top of that nobody likes being wet and miserable, so we hurriedly started finishing up to head back to the tents before we got soaked. As we rappelled, however, our path led us directly down Thin As Ice, a 5.10b route that goes straight up the slab with no real holds to speak of, only the sharp textured granite to provide friction for ascent. Here we faced one of those choices that should be obvious to anyone of sane mind, but often becomes difficult in light of the morbid sort of enjoyment for suffering many climbers share. We looked furtively to the sky, scoped out the featureless face in front of us, then glanced skyward again. Trying to climb a moderate slab in the rain with friction wiped away by the cascade of water would be an extremely difficult undertaking, and yet that's exactly why it appealed to us. We tied in.

As I started up the climbing was fairly moderate and I slapped wet hands and feet easily against the rock, moving higher on palms and soles smeared over no holds at all. Water trickled around and across my fingers, and if I stopped in one place briefly I could feel my footholds slowly slipping away. Kelsey and I cackled gleefully as the rain picked up and water began forming heavy streams straight down our route. Placing my feet slowly and weighting them gently, I moved steadily from one smear to another, anticipating at any moment a slip that would send me sliding backwards down the slab toward Kelsey. As I got higher the moves had me grunting short high pitched noises of surprise when my feet repeatedly slipped, letting me down a foot or two. Then ten feet below the anchor my upward movement stopped completely. 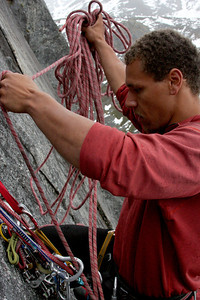 One factor involved in climbing a lot of routes in a row is the cluster achieved when rearranging gear a dozen times. 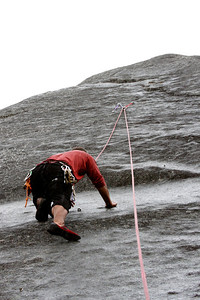 Kelsey approaches the crux section as water cascades down the wall in ever-growing streams.

It was only a short section, perhaps two or three feet where the slab rounded up into a dead vertical angle and then lowered back into its friendly slope again, but with torrents washing down around me I couldn't seem to get enough friction to get over it. As my footholds oozed away, I tried going up, then left, then right, and remained stumped. Kelsey laughed from below while I whimpered and whined, setting one foot, then the other back onto the placements they had just drifted out of. After a desperately slippery time period, I eventually oozed to the right, standing on nothing at all just where the wall got steep, and wrapped my fingernails over two or three sharp crystals in the granite. From this position I utilized a mighty quavery whine that stretched on for indeterminable seconds in order to move my body higher and gain shaky purchase for a foot above the impasse. With relative security finally obtained I let out a strangled chuckling gasp as I put the difficult crux behind me and slip-slided my way to the anchor.

Kelsey followed me, making strange noises of his own and taking a couple slides at the crux before he got to the top, and then we decided to give up on climbing for the time being and headed back to the tent. Of course that's when the weather cleared up, so we ate lunch and climbed the large "Nugget Boulder" while the rocks dried out, and then we went back and finished up the climbs on Snowbird Slab and the Cornerstone, wrapping up after a total of fourteen routes. A bit of ramen soup for dinner warmed us up, and we curled up in our tents.

Morning woke us with a heavy pounding of rain on our tents, of course, and then the sound of approaching footsteps outside our tent. "Is John Borland here?" someone asked.

"Yeah that's me," I replied, not recognizing the voice. The conversation carried on, and eventually through groggy reasoning on points and subjects discussed, I deduced that I was speaking to Ty Morrison-Heath and Will Laxson, and a soaking wet panting animal that slapped my tent repeatedly with its tail. I emerged from my cozy dryness to find the valley covered in clouds and everything sopping wet. There would be no climbing today unless things cleared up enough for the sun to come out and dry the rocks. Ty and Will were soon joined by Jake Higbie and Sam Lahey. They had all hiked in to say hi to us even though it looked like they wouldn't be climbing on such a dreary day. They did, however, bring their slackline, and we had enough gear to rig the highline over Reed Creek that I had done several years before, so we decided to make something good out of the bad weather and headed up to the small steep-sided section of rapids that makes the gap for the slackline. 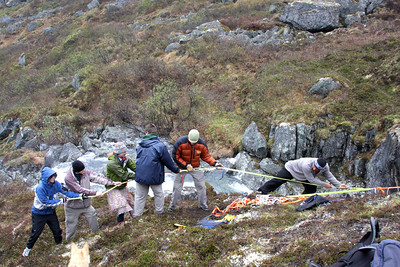 The gang gets together to tension the highline in preparation for the day's walks.

Ty takes a dive off the highine with the roaring waters drowning his screams.

Some years ago in a battle of climber ethics, the original bolts we installed to walk this highline were removed by someone else, but the holes themselves still remain and we had hardware enough to rig the line with only one bolt on one side instead of the more desired two. In highlining this certainly isn't optimal, but based on the low height and narrow gap, the forces and danger involved with this line are minimized. We set about rigging and in no time the line was ready to walk. The walk goes down for Kelsey in the grey cloudbank of a soaking wet Hatcher Pass.

We all had a blast over the next couple hours, with the line seeing walks by first Ty in one direction and then Kelsey and I in both directions. Many attempts were made, and there were several impressive falls from the middle of the line, well out over the rushing cataracts below. As the fun drew to a close, Kelsey, Tracy, and I stuck around for a few more walks while the others took off to get back to anchorage. As we took everything apart and headed back to the tents the rain picked up again, ensuring that nothing would be dry for a few days to come, so we packed up and headed back to civilization, another few days of adventure behind us.

The rest of that summer was miserably rainy, setting records for both precipitation and low temperatures. Not to be denied our climbing time however, we made many more trips to Hatchers in spite of the weather, and many more routes were climbed in downpour conditions with clouds drifting by at arm's reach. As the snow returned to the mountains in the fall and access to our favorite crags in the mountains was cut off, we did what any climber ought to do in such conditions: We filled a car with climbing gear and migrated south to dry rock in far off distant places. But that's another set of adventures entirely!

Thumbs up at the end of a successful day of walking a highline.